Householders need to be vigilant regarding roofers and other trades people who knock on your door uninvited. 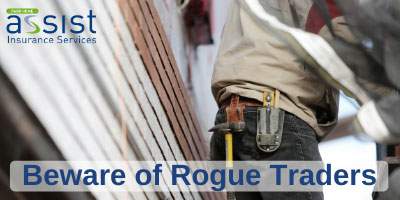 We have recently been made aware of a vulnerable park home owner who was approached by some trades people who had been working on a neighbouring park home.  They approached the 92-year-old in their park home offering to make repairs to the roof.  As with the majority of park home owners, this home owner was extremely proud of their home and had invested a lot of time and money in its upkeep over the years. Being aware that they were already planning on getting the home checked before the winter to ensure and avoid any possible issues during the bad weather, the home owner thought that the tradesmen had called at just the right time.

The home owner straight away allowed them to start work on the roof however when one of the home owners children arrived at the home and found out that their parent had already handed over more than £14,000 to the trades people, they immediately called the police and the trades people were arrested.  The work carried out on the roof was discovered to be substandard and as it had been carried out by unskilled workmen, this in effect created more problems.  The trades people were released on bail pending further investigation and now appear to have fled and are nowhere to be found, leaving a roof that now needs to be repaired costing at least another £8,000.

The moral of this story is to warn homeowners to be extremely careful of trades people who knock on your door uninvited and to make sure if you do decide to let them begin work on your home you carry out the relevant checks and research on the company.

Be on your guard especially with uninvited trades people who come to your door offering to carry out work on your home.  If you enter into a contract with someone at your door you could be entrusting potentially expensive work to someone who you do not know or have never heard of and may never see again.

We may request cookies to be set on your device. We use cookies to let us know when you visit our websites, how you interact with us, to enrich your user experience, and to customize your relationship with our website.

Click on the different category headings to find out more. You can also change some of your preferences. Note that blocking some types of cookies may impact your experience on our websites and the services we are able to offer.

These cookies are strictly necessary to provide you with services available through our website and to use some of its features.

Because these cookies are strictly necessary to deliver the website, refuseing them will have impact how our site functions. You always can block or delete cookies by changing your browser settings and force blocking all cookies on this website. But this will always prompt you to accept/refuse cookies when revisiting our site.

We fully respect if you want to refuse cookies but to avoid asking you again and again kindly allow us to store a cookie for that. You are free to opt out any time or opt in for other cookies to get a better experience. If you refuse cookies we will remove all set cookies in our domain.

We provide you with a list of stored cookies on your computer in our domain so you can check what we stored. Due to security reasons we are not able to show or modify cookies from other domains. You can check these in your browser security settings.

We also use different external services like Google Webfonts, Google Maps, and external Video providers. Since these providers may collect personal data like your IP address we allow you to block them here. Please be aware that this might heavily reduce the functionality and appearance of our site. Changes will take effect once you reload the page.